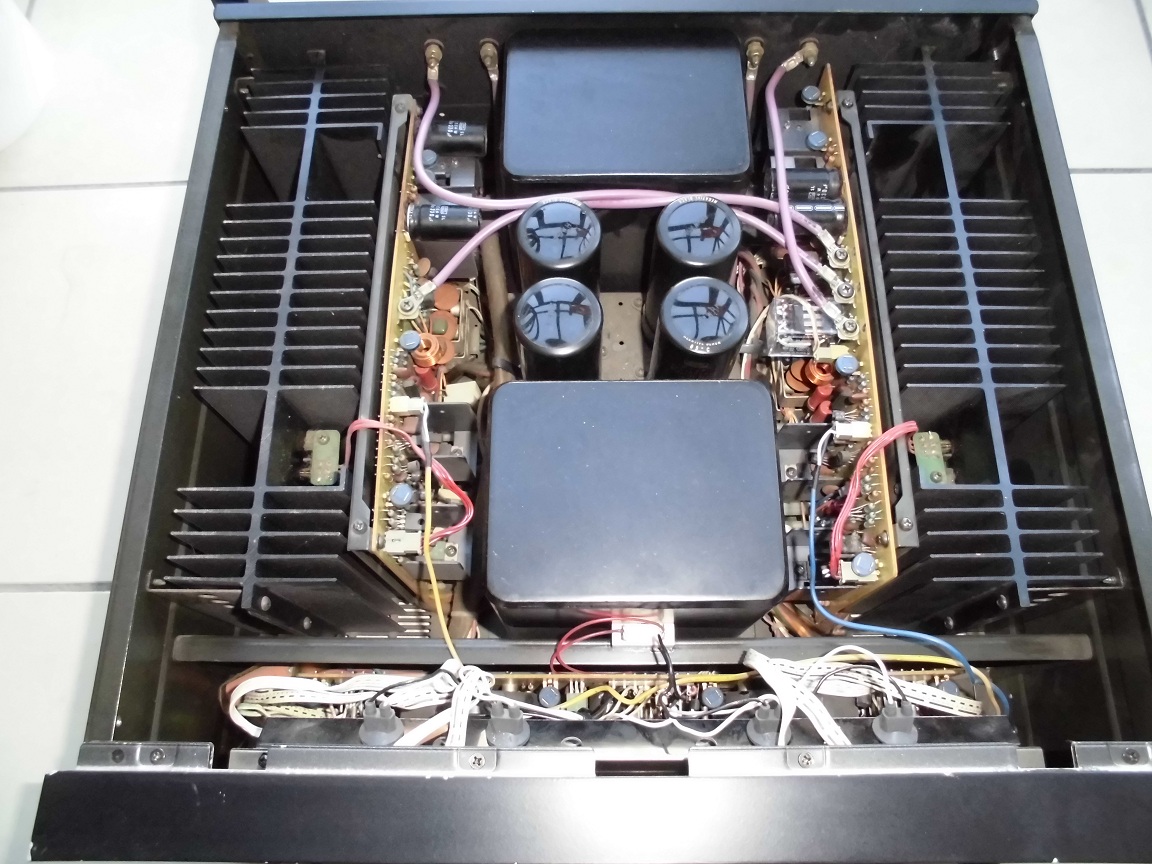 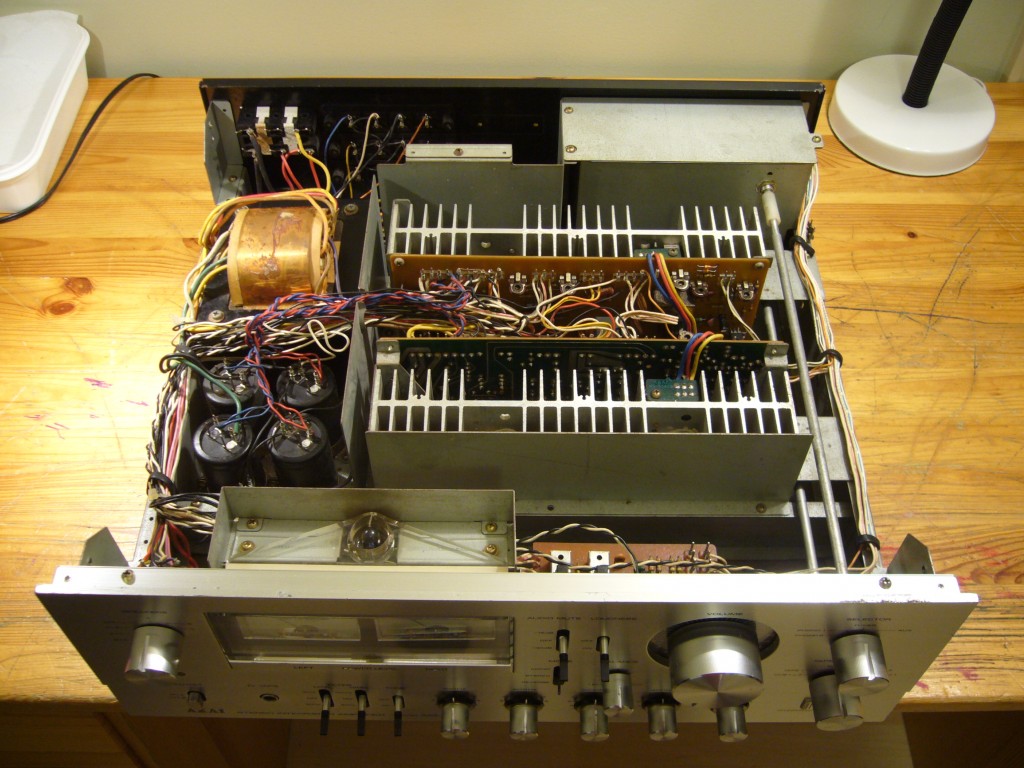 AKAI GX 255 - to be perhaps, the pinacle of the mid-priced 7" reel decks, the Akai shown here basically used the same electronics and mechanical design as the higher-end GX-620D, GX-625D, and GX-635D sets, which were the 10.5" reel versions. The GX-255 was not directly imported into the USA as far as I know, and so, it is not seen that often. One feature which really sets it apart, from most similar models in the GX-2xx line, is its partial smoke grey clear head cover, and the matching smoked grey ( lighted when operational ) Operation Block Controls - which are really neat ! I'm especially fond of the green blinking Play Button during the "Pause" function. The GX-255 has the later IC Logic based operational controls as can be found on the GX-620D, and GX-625, two sets which have a fairly similar look to the GX-255. Still, if you look closely, you'll see that the two 10.5" sets have the pinch roller situated above the capstan, as the various GX-630D sets also do. Note that GX-6xx sets are all 10.5" reel capable. Something else that sets the GX-255 apart is, that in a four-head configuration ( auto-reversing in playback only ) deck, it uses the same later model heads ( perhaps by the numbers, even later heads than are found in the much revered GX-747 and GX-747dbx ). Specifically, the GX-255 has the R4-242 Record Head along with the P4-251 Playback Heads. It also uses a high end capstan motor model SCM-200B, which, from the "B" designation probably means it is a revised/improved version of the capstan motor found in the highest end of the Akai's, the: GX-620D, GX-625D, GX-635D, GX-636, GX-646, and GX-747 decks. Interestingly, the GX-230D, and the GX-255 both have a solonoid operated pause control, a design which is not found on some of the higher-end auto-reverse / reverse recording decks, such as the six head: GX-265D, GX-266D, GX-266II, and GX-267D.

AKAI GX-266 II - Evolving to the final version in the 7" reel, 6 head design, within the GX-2xx Series, we come to the GX-266II, which incorporates three additional features: 1) The capstan motor found in the GX-635D and higher numbered sets in the GX-6xx Series. 2) A Remote Control Socket on its rear. 3) The front panel +/- 6% Pitch Control to adjust the Servo-Control in Playback mode. A refinement over the GX-266D/267D is the twin stationary (reverse) sensing posts, whereas the prior sets had one stationary post on the left, and one sensing post on the moving right tension arm, which is prone to failure, much like the similar right tension arm that is found on the GX-400D.
Cosmetically, I do prefer the black button accenting and contrasting seen on the GX-266D/267D to the GX-266II's all-silver/no contrast look. Still, the record and playback heads of the GX-266II seem to have also evolved one iteration numerically from the prior sets: the R4-241 record head, the P4-251 Playback head. Just how much the large numerical jump in Playback Head designation effects a sound improvement in the GX-266II as opposed to the GX-266D/267D is very difficult to know. But in general, record and playback heads that are higher numerically, do have a better frequency response specification, as listed in the Service Manuals.

Truth be told, both the GX-267D and the GX-266II use some of the best circuitry in the audio path, no IC's, not even for the headphones. Some of the other sets use an IC here and there, and for the most part, those more expensive later designed sets, for all their fancy features ( specifically the GX-255, GX-620, GX-625, GX-635D, GX-636, GX-646, and GX-747 all use an IC for the headphone output, which I think limits the Sonics, and also the output headroom... at least from the headphone jack. The GX-267D and GX-266II instead use a simple complementary-symmetry output stage, after multiple single-ended stages and for some reason ( or maybe for that exact reason, it simply sounds better than some of its brother and sister sets ). The later GX Heads, those with higher numbers, are found in the later machines, which are usually the more expensive models. Other than those half a dozen differences, the GX-266II appears to be quite identical to the prior GX-266D, and the GX-267D. While I don't care much for the "revisionist" VU Meters found on the GX-266II... What can you do? The second picture is a closeup of these VU meters on the GX-266II...

AKAI GX-265D - There are several similar sets later in the GX-260 line, which all feature basically the same electronics and somewhat similar mechanical designs. Mechanically the GX-265D does resenble the GX-230D to some extent. On a functional note, when foil activated reverse is initiated, on both the GX-230D and the GX-265D this simply reverses the direction of the capstan motor, without stopping. Later sets have an intermediate function, where the pinch roller is disengaged for nearly 2 seconds during which time the capstan motor changes direction, then the pinch roller is re-engaged. Its a "Clink, Hmmm, Clink" process that takes about two seconds to complete and I guess it doesn't mean much, but it is present on the later 266D/267D/266II sets, which are closer to the high end GX-620D, GX-625D, GX-635D, 10.5" Reel versions.
GX-265D, and those sets that followed, use a symmetrical head configuration, with a center capstan drive. The GX-265D uses two of the combo erase/record heads, while later sets: the GX-266D, GX-267D, and GX-266II all use a true 6 head configuration, with auto- reverse, continuous reversing and reverse-recording initiated by using foil activated sensing posts. " GX ISM has become a fully independent separate type of mount system, making it the were separately mount the playback head and the recording head structure. Thus, in the combination type head becomes a recording head was not adjustable and can be individually of azimuth adjustment of playback head, according to the one by one tape running even after incorporating the head to the mechanism can be adjusted to the best phase characteristics have.
In addition, the head winding is adopted the finest oxygen-free copper wire with a reduced component of quality harmful hydrogen gas to the limit, "LC-OFC class 1 material (quantum)".