T.H.E Show is, once again, open to any authentic
Audiophile Society Member, from anywhere across the globe. 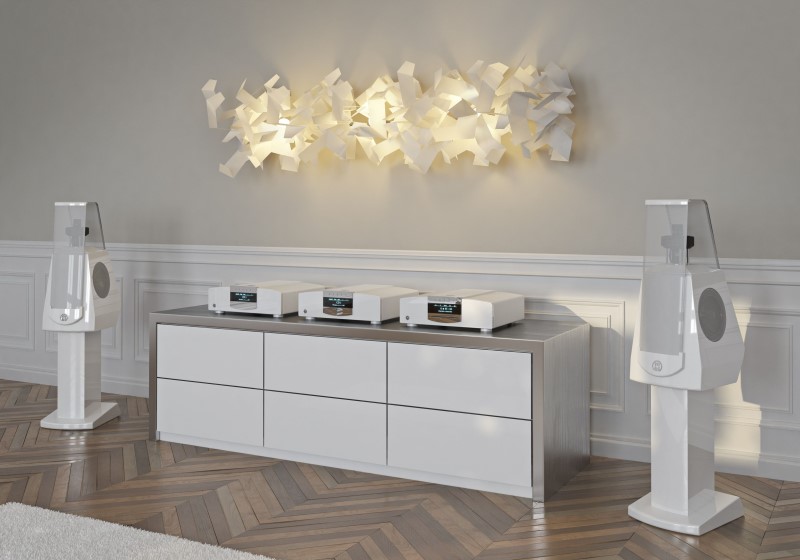 I have to wonder how large the audiophile market truly is, compared to say the musically undiscerning wealthy who simply want to own “what’s best.” There were literally hundreds of manufacturers at the Venetian and the Flamingo, and most of the components, speakers and cables being shown were very expensive, some obscenely so. And yet, what I saw was a tremendous amount of marketing and very little innovation, and even less differentiation. Many of the manufacturers are well known, but an increasing number are new, at least to the US market. More manufacturers, more products, more marketing and higher prices.

Based on my listening impressions, price appears to have at best a tenuous relationship to performance. One of the best systems I heard cost less than $8000. It was comprised of a Sota Comet turntable, a Rogue Audio Ares phono stage and Cronus Magnum integrated amplifier, and a pair of Magnepan 1.7 electrostatic loudspeakers. I don’t remember who supplied the interconnects and speaker cables; I do remember that they were not made of platinum, their performance did not involve quantum tunneling, and they did not cost as much as a luxury automobile. Nevertheless, what I heard was music.

At the other end of the spectrum was a system that cost nearly two orders of magnitude more - roughly $700,000. It was comprised of the Wilson Alexandria X-2s, a pair of Lamm ML3 Signature monoblocks, the Lamm LL1 Signature dual mono preamplifiers, a pair of Lamm LP2 phono preamplifiers, a daVinci AAS Gabriel turntable with dual Grand Reference Grandezza tonearms and phono cartridges, a Neodio CD transport and DAC, and Kubla-Sonsa Elation interconnects and speaker cables. Did I mention that the components rested on nearly $100,000 of racks and amplifier stands from Critical Mass Systems? What I heard was not music but sound, all smooth and buttery but without life. I’m not sure the rest in attendance heard anything – they all appeared comatose. Perhaps they were worshipping.

Somewhere along the line, high end audio has taken a wrong term, and where it has headed is toward exclusivity and trophy systems. And Las Vegas is the perfect venue to show off these systems. I realized this the second day as I was making my way to the elevators to the upper floors of the Venetian. The walk took me past stores selling Gucci, Louis Vutton, Hugo Boss, Rolex, jewelry by van Cleef & Arpels, and the like. Honestly, many of the demo rooms at the Venetian could just as well have been on the first floor.

I am neither suggesting that all components sound the same nor that many expensive components do not sound better than their less costly counterparts. What I am suggesting is that the price-performance paradigm is no longer valid. The goal is no longer to get high up on the shoulder of the curve. Price is not simply not a reliable indicator of performance, it is no indicator of performance.. This is, of course, not a new observation; but I think the truth of it has been both significantly understated and radically under-appreciated.

I spoke with more than a dozen manufacturers who were introducing new components and who had not “settled on” retail pricing. They said they were still studying the market. It was clear that they were simply trying to determine what the market would bear.

Let me give you an example. Recently the $115,000 Engstrom LARS tube amplifier has made a big splash. The first time I saw it was at AXPONA last May driving the Scaena loudspeakers. Art Dudley said “it may very well be the best amp I've heard.” I happened to run into Jim Smith, former sales manager of Avantgarde loudspeakers and author of Get Better Sound, at RMAF in October, and learned that he had become the US distributor. I asked him how the amplifier was selling. He told me that as a condition to taking on the distributorship, he required that Engstrom lower the price; otherwise he felt the amplifier would not sell. Result: at CES the new MSRP was $80,000. Whither $35,000?

Here’s another example which demonstrates the flip side. I spoke with the distributor for Silbatone at CES. He showed me the $38,000 Reference 300 integrated amplifier. He then showed me the $23,000 JI-300 MkIII integrated amplifier. He confessed - why I don’t know - that they were exactly the same except for the external casework, and he told me that dealers did not want to carry the $23,000 version. They didn’t think it would sell as well as the $38,000 version.

Yet another example – the Audio Power Lab's 833 TNT. This is a new monoblock power amplifier based on a pair of huge 833 vacuum tubes used in AM broadcasting transmitters. I asked the manufacturer what the retail price was. He said it would be between $80,000 and $100,000. A $20,000 spread? They were demonstrating the amplifiers with a pair of Vandersteen 2CE loudspeakers which have been in production for at least 15 years and currently retail for $2195/pair. I thought the speakers sounded very nice and are a real bargain. As I was leaving a very attractive young woman offered me a T-shirt (mind you this was the 34th floor of the Venetian). The marketing slogan: “My Tubes Are Bigger Than Yours.” Really? Their tubes may be bigger, but the question is does the amp sound better than others and is it worth the asking price? At least I think that is the question. Sometimes I wonder.

One more and I will stop. I was in one of the McIntosh rooms and saw a new McIntosh clock with two of its famous blue meters cleverly showing the time. One of the McIntosh representatives told me it was still a prototype. I asked him how much it would sell for. He said they were thinking about $2000, but he thought it should be higher. His view was that the McIntosh faithful would gladly pay almost anything for it. Perhaps that is how they price their audio components as well.

Keep this in mind when looking at the photos and comparing prices. Ask yourself why in the world would you buy this product instead of a product from an established company with a track record of high quality products whose designs are based on sound engineering principals and known science, and whose prices bear some reasonable relationship to the cost of real on-going research and development and the cost of production.